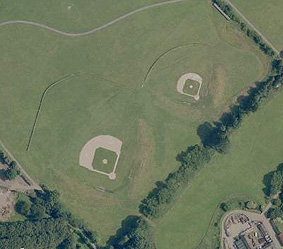 Much of the interest generated in Baseball over the past few years can be attributed to the dream of a generous sponsor and the development of a purpose-built Baseball facility in Clondalkin, West Dublin.

Irish-American Peter O’Malley, former owner and President of the Los Angeles Dodgers Baseball organisation, first met with the Irish Baseball & Softball Association in 1994. Having already developed baseball fields in the Dominican Republic, Nicaragua and China, O’Malley pledged to the building of an Irish Baseball facility.

Building on the site began in June of 1997 and both fields were officially opened for play on July 4th, 1998. The facility incorporates a regulation sized adult field and an international standard Little League field. The fields are located in Corkagh Demesne Park in Clondalkin, West Dublin.

The fields are the centrepiece of Baseball activity in Ireland and play host to regular season league games for adult and youth teams as well as international fixtures.

With the addition of this purpose built national Baseball facility the total number of youth and adult baseball teams and the profile of the sport is expected to grow significantly over the coming years.

How To Get There

Take
the N7 (Naas Road) West. Make a right turn at Newlands Cross Intersection – there is a Bewley’s Hotel on the right hand side. Go through two intersections with traffic lights and make the first left hand turn AFTER a pedestrian crosswalk that has a small set of lights. Follow that road (St Johns Road) to the right and it will lead you straight to the entrance of Corkagh Demesne Park.

Follow
the signs to the car park. After parking, to the right of the car park, there is a MAP of the park and where the baseball diamonds are located. Follow the footpath into the park. When you come to a fork in the road, go to the right. Walk for about 5 minutes and the fields will be located to the right past a row of trees. If all else fails, ask someone in the park and they will undoubtedly
know where the baseball fields are.

Check out the Dublin Bus website for information on how to get there by bus.